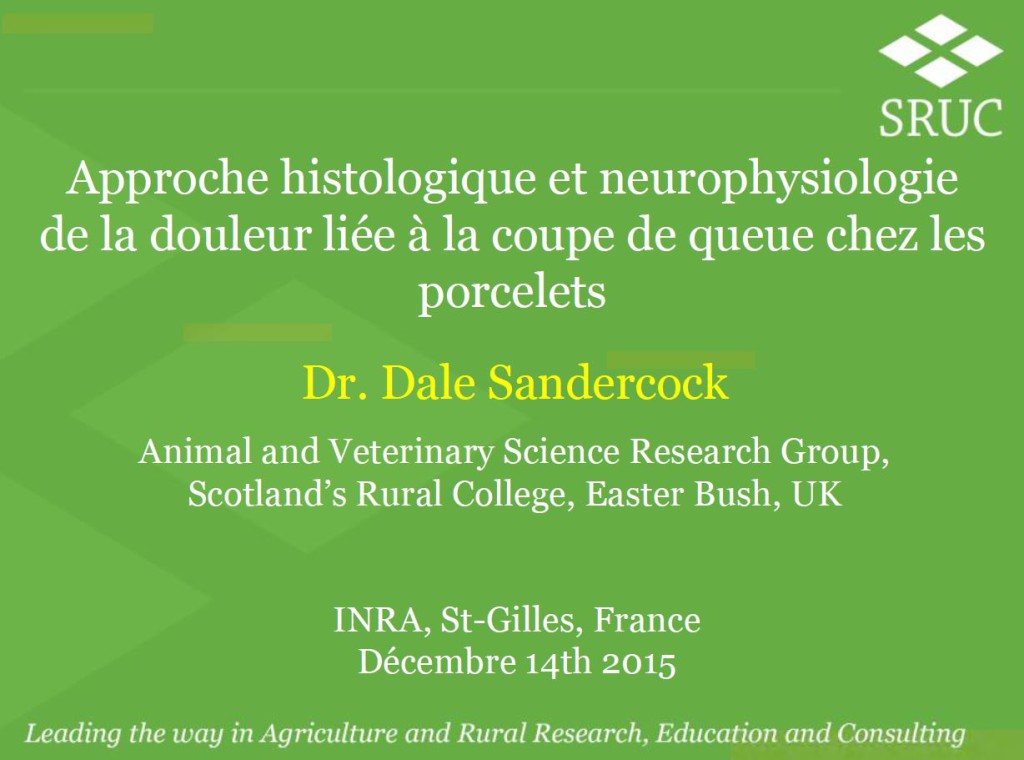 Tail biting is a common and serious welfare problem in pig production, causing large economical losses. Tail docking is performed routinely in most EU countries to reduce the tail biting risk. However, tail docking is painful, and does not prevent tail biting totally. In Finland, tail docking is forbidden. New research shows that most Finnish producers would not raise tail docked pigs if it were possible.

Professor Anna Valros led a project asking with a web-survey from the Finnish farmers how they manage to raise pigs without tail docking. Respondents scored feeding-related issues to be most important for prevention of tail biting, identifying and removing the biting pig as most important intervention measures, and straw as the most important manipulable material when preventing tail biting. Tail biting was not perceived as a serious problem by over 70% of the respondents, even though docking is not allowed, and was reported to occur close to a level which was also considered acceptable by the respondents. Most respondents did not think it is probable they would raise tail docked pigs if it were possible, but about 21 % probably would.

These results are important for trying to reduce the risk of tail biting, and subsequently the need for tail docking on an international level.

This first week of February 2016 two items related to tail biting appeared in farmers’ press in The Netherlands. In addition, we recently provided input into a European project on the welfare of poultry, which will be reported on briefly below.

One news item announced that farmers are invited at the Intensive Farming Fair in Venray (LIV Venray), March 1-3 2016. At the fair two finished tail-biting projects will be presented and discussed with entrepreneurs who are active in intensive farming. One of the projects is ‘Keeping pigs with intact tails’.

The other item was a report on the German tail biting (Ringelschwanz-)project. First results of the curly-tail project in North-Rhine Westphalia showed that more than one quarter of piglets at 15 participating research farms had damaged tails before the end of the rearing period. At some farms half of the tails had been bitten. At the 15 farms participating in the study 30-94 piglets had been reared on each farm without tail docking. Outbreaks of tail biting appeared to be associated with streptococcus infections. Prevention and intervention strategies included providing dried maize silage or alfalfa hay twice daily and the isolation of biters respectively. Most tail biting occurred between week 2 and 4 after weaning. This level of tail biting is not so good news. If these levels of tail biting would persist, it may indicate that intensive systems cannot be made compatible with acceptable levels of animal welfare. Fortunately, however, experiences in Finland indicate that it should be possible to keep undocked pigs in conventional systems at much lower levels of tail biting (around 2% based on slaughter house data).

The German farmers union and North-Rhine Westphalia have agreed 1.5 years ago that they intend to stop tail docking by 2017. This will be done provided on-farm research shows that tail biting among pigs with intact tails does not reduce animal welfare. The general expectation is that the objective of safely quitting tail docking cannot be met.

From a Dutch research perspective two notes appear to be relevant:

The first is that our semantic-modelling approach provides a unique methodology to determine/assess  the cut-off point between the welfare impacts of tail biting and tail docking using formalised biological reasoning and scientific evidence. In this computation one must take into account all relevant aspects: So, not only the point that the welfare of tail bitten pigs is reduced due to blunt trauma (biting) compared to the sharp trauma of tail docking at an earlier age. But also the point must be recognised that the welfare of tail biting pigs may relatively be improved when they can bite their penmates’ tails, compared to when they cannot (other things being equal, i.e. lack of suitable enrichment). What matters for welfare as considered from the animals’ point of view is the extent to which they can satisfy their needs, e.g. for biting and the expression of species-specific foraging behaviour, taking into account also the activation of coping mechanisms such as redirected and harmful-social behaviours.

The second thing to note about the results of the German research project is the following. In addition to taking note of the bad news (many bitten tails, which has to be taken seriously, perhaps even to the point that the conclusion must be drawn that intensive systems are not compatible with acceptable animal welfare), one may also try to move forwards for the time being by focussing on the good news: Two out of the 15 pilot farms in Germany managed to keep all piglets’ tails intact. Other farms may learn from what was done on these farms to keep tails intact. Furthermore, since the EC Directive requires that all farms try to periodically keep at least some intact pigs, a 10% success rate could provide sufficient scope for progress at the population level, even when the causes of the success are poorly understood. This can be concluded from a methodology we designed previously to solve complex welfare problems like feather pecking in poultry and tail biting in pigs. This methodology has been called ‘Intelligent Natural Design’ (INO in Dutch; see also Bracke, 2010). It basically uses evolution to select the best farms to make increasing progress towards the objective of completely stopping the practice of routine tail docking in pig farming.

Countering the routine practices of tail docking and beak trimming, as well as preventing and treating outbreaks of tail biting and feather pecking requires an understanding of tipping points. Recently, we modified our tipping-bucket model for tail biting for inclusion on the Henhub website. This website, which is part of the Hennovation project, gives information about welfare issues in poultry, esp. (at present) feather pecking. On that site the modified tipping-bucket model can be found under the post describing the mechanism of feather pecking.