Tail docking: The final cut? By Monique Pairis-Garcia. You can read the first part of this article here. For the second part see the original at the Pig Progress site (published August 8, 2016).

Tail docking is applied to young piglets to avoid a potential problem later of tail biting. However, should the root of the problem be looked at instead of using this preemptive measure?

Tail docking is routinely performed on farms as a means to decrease the prevalence of tail biting. Tail biting is an abnormal redirected exploratory behaviour that results in mild to severe injury of pen mate’s tails. Several factors have been associated with tail biting behaviour including environment, nutrition, gender, genetics and health status.

Tail docking of piglets has and continues to be highly criticised in both the US and Europe. This is primarily driven by the fact that tail docking is a painful procedure as indicated by changes to the physiology and behaviour of pigs who are tail docked.

Most recently, European countries have taken a stance to eliminate this management practice by managing the problems which lead to tail biting in the first place. Several research projects including FareWellDock have been established to provide scientific research to determine the best practices to eliminate tail docking and control tail biting. Although several factors can contribute to tail biting, research has consistently demonstrated that the absence of material for manipulation increases risk of tail biting. Several enrichment objects including chains, rubber hoses, car tires, straw and peat moss have shown to decrease tail biting but not necessarily eliminate the behaviour altogether.

Unlike the European approach, the US is nowhere near implementing the elimination of tail docking on farm. Tail docking is still performed routinely on commercial swine operations in the US. Farms which are not tail docking are either smaller farms which provide outdoor access to pigs or farms on specified animal welfare friendly programmes like Animal Welfare Approved, American Humane and Certified Humane.

For the second part of this article (on the probability of eliminating tail docking and the value of enrichment) see the original at the Pig Progress site (and see also the comment section).

What are the effects of tail docking on piglets? Interview with Dr Pierpaolo Di Giminiani by Vincent Ter Beek in Pig Progress (August 8, 2016). Here you find the first half of the interview. The whole article can be found on Pig Progress.

The practice of tail docking is applied to young piglets to avoid a potential later problem of tail biting. But are there effects of docking on piglets? Very few researchers have asked that question, found Dr Pierpaolo Di Giminiani, researcher at Newcastle University, UK.

Is a tail actually a sensitive part of the pig’s body? Dr Pierpaolo Di Giminiani thinks for a while and says, “That is a very good question! I would say it is not more or less sensitive than other parts of the body. The tail is full of neuro-anatomical structures responsible for the pain response. It is comparable to our human skin.” Unlike in many other animals, the pig’s tail may not have a wide range of functions. At best it serves to chase insects away and when in a curl, it gives an indication of the animal’s health. Still, when something happens to that tail, whether this be being docked or bitten, this body part responds like any other.

Dr Pierpaolo Di Giminiani is a research associate with a focus on ethology (animal behaviour) at Newcastle University, UK. During his graduate studies at Linköping University in Sweden, he studied the cognitive impairment caused by anaesthetic protocols in rodents. At his doctorate at Aarhus University, Denmark, he focused on the assessment of behavioural measures of pain in pigs as a result of cutaneous inflammation. Currently, he investigates pain in pigs in relation to the practice of tail docking in piglets and tail injuries in older pigs.

Tail docking – and especially the effects of tail docking on piglets – has been the focus of Di Giminiani’s studies since the beginning of 2014. They form part of the FareWellDock research programme, an international conglomerate funded by the European Union, zooming in on the common problem of tail biting, the preventive solution of tail docking, virtually common everywhere in Europe, and what can be done to overcome both. Especially tail docking of piglets is a practice which is increasingly frowned upon in some European countries. For more information on FareWellDock, see box below.

Di Giminiani’s studies have mainly centred on the question of whether piglets in the short and long term suffer from any pain from tail docking. In an interview with Pig Progress, Di Giminiani points to pain being a very complex experience and it being difficult to measure properly. He says, “I find it fascinating because there is a lot that we can do, especially in a species like the pig. A lot has been done in humans and laboratory animals and we now have the opportunity to apply novel techniques in other animal species. In addition, pain mitigation is often not provided or done so arbitrarily due to the lack of valid measures of pain in non-verbal animals. Therefore, it still remains one of the big open questions in research.”

In many other animal studies, Di Giminiani explains, research on pain sensitivity is fairly common. Before he set himself onto the theme of pain in piglets, an academic journey took him from his native Italy to San Diego, United States and later Linköping, Sweden, to learn and discover more on pain perception in laboratory rodents.

In pigs, however, everything was different, he says, as similar research appeared to be virtually absent in pigs when starting his PhD in Denmark at Aarhus University. Indeed, a bit strange, considering that pigs have an important role to play virtually all over the world – and considering the fact that from a medical perspective, pigs and humans are very similar.

Is pain actually occurring or not and how long does it last?
What is the level of pain experience for piglets?
Based on the outcome, what can be done – for instance the use of painkillers?
Di Giminiani says, “Basically, there are 2 common methods to assess pain in animals:

To observe spontaneous behaviour. You just observe the activity of the animals, e.g. how much they walk – their locomotion – how much they lie, how much they stand, how do they drink, how do they eat, etcetera.
“Another method revolves around stimulus and reception – how do animals react to certain controlled challenges? We apply a controlled challenge to evoke a reaction.” This last method had not been applied in pigs a lot, but was used at Newcastle University to figure out short and long-term effects of tail docking on piglets.
Di Giminiani’s research team applied a gas-heated iron for tail docking, so that any wound would immediately be closed to avoid infections. He says, “In addition to measuring responses to controlled stimuli, we developed a grimace scale to measure the facial expressions of piglets. They do seem to grimace, particularly that they squint with their eyes in the minutes immediately following tail docking.” A full scientific paper related to the findings will be sent for publication in the summer of 2016.

For the last three sections of this interview (Pain in animals in the longer term; Does it matter?; FareWellDock) see the original article, as well as several related articles, on the Pig Progress site. SRUC organises the 2nd Animal Welfare Day.
2015 marks 50 years since the publication of the report of the Brambell Commission which really began the scientific investigation of animal welfare, and laid the foundations for the Five Freedoms.
SRUC marks this anniversary with talks, demonstrations and discussions around the theme of the Five Freedoms, incl. the hosting of a webinar.
The 2nd Animal Welfare Day is held on 8th October 2015 at the Roslin Institute Building, Easter Bush Campus.
FareWellDock partner Dale Sandercock will be using this event to discuss and demonstrate quantitative image analysis (histopathology and TEM) in relation to tail docking in pigs from the FareWellDock project.
Entry is free but requires registration (see flyer). 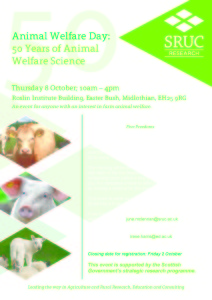 Coverage of the project startup:

SE: Dr. Stefan Gunnarsson of SLU was interviewed about the FareWellDock project on Sveriges radio (17-7-13, in Swedish).

UK: See the post on the UK’s media coverage to the press release issued by SRUC.