On July 12th the FareWellDock consortium hosted a satellite meeting and videoconference at the Roslin Institute Building near Edinburgh to coincide with the 50th conference of the International Society for Applied Ethology. The aim of the satellite meeting was to invite researchers involved in other European projects on tail docking and biting to share their work and ideas with the consortium.

Updates of the three work packages were also presented at the meeting. Since the last meeting in March, several more articles on tail docking and biting have been published and a number are near completion. Work progress in all three work packages appears to be on track.

Emphasis was placed upon generating and circulating draft fact sheets from the 3 work packages before the FVO Stakeholder Meeting in Grange, Republic of Ireland on October 4-6th 2016.

Sabine Dippel, a researcher at the Federal Research Institute of Animal Health (FLI), provided a comprehensive overview of “Current tail biting projects in Germany” and the summarised outputs from 51 different projects ranging from those focussed on basic science to feasibility and survey-based studies. Preliminary findings suggested that:
• Undocked weaner pigs were at higher risk of tail biting than undocked fattening pigs.
• Farmers need to gain experience in observing pigs
• Farms need to change step-by-step towards intact tails
• Focus on farm-individual optimisation
• Greater coordination between production stages
• Advice, training, knowledge transfer were essential to achieving these aims 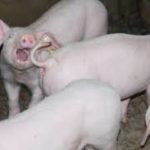 Valérie Courboulay a researcher at IFIP (French Institute for the pig and pork industry) provided an overview of several IFIP related studies on tail biting and dissemination of information in the form of technical datasheets to French farmers. Data presented from studies where pain relief (meloxicam) was provided at the time of docking and castration showed marginal affects on general behaviours, except for increased time spent sitting. When investigating tail posture, pigs with more severe tail lesions (score 3) exhibited more tail-down posture than pigs with minor tail or no tail lesions (score 2-0). A recent study has been undertaken to develop a model of cannibalism in pigs based on frustration of exploratory behaviours by providing environmental enrichment (progressive supply) and straw in the post weaning period and then some groups were reared with or without environmental enrichment for a short duration in the fattening period. The results showed that:
• Removal of enrichment between the post weaning and fattening periods is not sufficient to induce tail biting
• Providing objects for a few days and removing them is not sufficient to induce tail biting
• Frustration of investigative behaviour, that is considered as a major risk factor, is not sufficient to induce tail biting 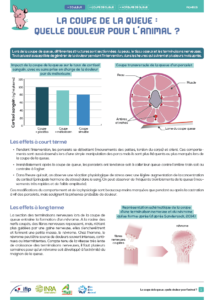 Jen-yun Chou, a first year PhD student working at Teagasc in the Republic of Ireland, presented preliminary findings from her studies into the use of wood as a strategy to reduce the risk of tail biting in pigs managed on slatted floors. The potential use of wood as a manipulable material is viewed positively in Irish production systems due to the problems of slurry removal caused by loose straw in fully slatted systems. To date, preliminary data have shown that softwoods such as spruce and scots pine are more readily used by the pigs compared to more hardwoods such as larch and beech.
• Spruce was used up most quickly both in terms of length and weight loss, possibly due to its softness.
• There is a tendency of more interaction with the wood by pigs in pens provided with spruce.
• In terms of texture and moisture spruce is a good option for enrichment but the cost may be a drawback
• Different wood types did not affect harmful behaviours, pig physical measures and production.
• Correlation between ear lesion and tear staining scorings implies a potential welfare assessment method on farm due to easy visibility.
• Correlation between tail posture and lesion shows that posture could be an indicator of tail biting 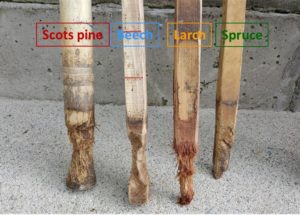 Anna Sinclair, a first year SRUC PhD student currently working at the Institut National de la Recherché Agronomique (INRA), presented preliminary findings from studies into the behavioural and neural/cellular consequences of tooth resection in commercial pigs at its implications for pig welfare. Although this work was not directly related to tail docking or biting it is a project that was developed through on-going collaborative research by Dr. Armelle Prunier ay INRA and Dr. Dale Sandercock at SRUC within the FareWellDock project, addressing the issue of early life pain in livestock. Preliminary data were presented on the effects of tooth clipping and tooth grinding on tooth length and tooth/gum injury, haematological measures, live weight/growth rates, general, stress and pain related behavioural measures. Findings to date have shown that:
• Tooth damage was readily observed but variable
• Maxillary incisors are most consistently affected
• Clipping results in tooth and gum bleeding
• Growth rates are unaffected
• Pigs exhibit reduced activity after tooth treatments
• Pigs keep their ears back less and their tails down more, although this could be handling effect
• High variation at this stage – more data are required 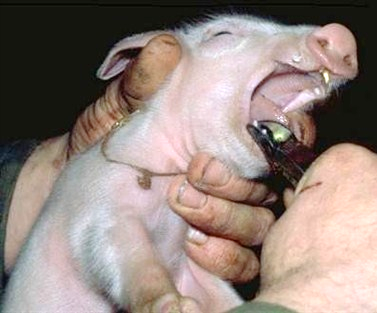