Oberst et al. (2015) presented a poster on the effect of tail docking in neonatal pigs on the expression of genes involved in modulating anxiety-like behaviour at the annual meeting of the Scandinavian Association for the Study of Pain (SASP) at the Karolinska Institute, Stockholm, Sweden (13-14th April 2015).

The abstract is presented below; the poster can be found here

Background: Adverse experiences in early life, such as exposure to stress, can have long term detrimental effects on the future physiology and behaviour of the animal. Typically animals exposed to such experiences are more anxious and more reactive to stress in later life. Tail biting is a major problem in modern pig production, both in terms of animal welfare and productivity. Tail docking in early postnatal life is common practice to reduce risk of this problem, but causes pain and may alter pain sensitivity.

Aims: To investigate whether a significant painful experience in early life (tail docking) alters the expression of genes in the amygdala that are linked to an anxiety-prone phenotype.

Conclusion: Increased expression of Crhr1 in the amygdala is associated with an anxiety-prone phenotype in rats and pigs, thus it is likely that tail docking in early life leads to enhanced anxiety which may have a negative impact on pig welfare. Ongoing experiments will determine whether these central changes in gene expression are long-lasting. 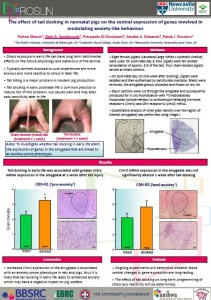