I’m a researcher at Teagasc, the national research and development authority for agriculture in Ireland. My position is funded by a levy which all Irish pig farmers contribute to, so my work really aims to provide practical solutions to current and prospective issues facing the industry. Although about 99% of Irish pigs are tail docked, tail biting is still a widespread problem; recent work found that 60% – 70% of approx. 40,000 pig carcasses had detectable tail lesions (PigWelFind project, led by Dr. Laura Boyle). There’s been little research to date in Ireland on strategies to reduce tail biting, but I’m starting work shortly investigating manipulable material that could be suitable for use in slatted systems (where most Irish pigs are produced), and varying the level of fibre in the diet. One of the FareWellDock members, Dale Sandercock is acting as a co-supervisor for the PhD student that I will recruit, so I was delighted to be invited to attend the recent meeting in Paris. It was a great opportunity for me to hear a bit more about progress and future plans that the group members have, as I’m relatively new to the area. I especially liked the idea of hearing about all the varied research questions addressed within the group, and the wide range of measures that are being used. 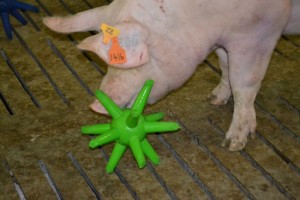 The meeting was also a good forum for me to present the results of a short pilot study that I carried out recently, trying out a new floor based enrichment device for pigs (pictured). I provided a group of 36 pregnant gilts with either 1 or 3 of the floor based or a hanging device at a time, and compared pig behaviour and tail and ear lesion scores, as well as measuring the wear of the devices (weight and arm length loss). During the experiment the hanging device didn’t lose any weight or arm length, but the floor based device lost approx. half the length of its arms, and significantly more weight when there was 1 rather than 3 provided. The gilts also interacted more with the floor device when there was 1 rather than 3 provided (see figure), which explains this loss, and more interactions ended with a displacement. Gilts also had lower ear lesion scores when there were 3 rather than 1 devices in the pen, which could also indicate the importance of level of access when it comes to reducing harmful behaviours. Bouts of interaction with the floor device were almost 5 times longer than the hanging one, regardless of the number provided. These results imply that the floor based enrichment device was more attractive to the pigs than the hanging one. Anecdotally, I could see from the videos I watched that pigs seemed to perform a lot of ‘rooting-like’ behaviours with these devices, which is not possible with hanging ones. They were also able to pick them up and carry them to various points in the pen, and chew on them while lying, again, all behaviours that are not possible with devices that are attached to a single point. I am hoping that I can investigate more precisely the specific behaviours and interactions that pigs have with this type of device in my future work. Finally, I was able to tell the group about my future plans! My project (ENTAIL) officially started on 1 April, and just after the meeting Amy Haigh, a postdoctoral researcher, started working with me on it. Dale and I hope to recruit a PhD student in the coming months as well. The work will initially focus on organic manipulable materials that can be used in slatted systems. We are planning to start with compressed straw blocks, and different types of wood, for use in growing and finishing pig pens. Following that we are interested in looking at the individual preferences of the pig, as well as perhaps non-organic options (such as the floor device I used with the gilts), and how much to provide. Hearing the reports from other FareWellDock researchers was really great, as I got lots of ideas on how and what to measure. I hope to stay in touch with the group and am looking forward to hearing about new results, as well of as course sharing the results that ENTAIL will soon be producing!