This post presents the abstract and executive summary of the EU report:

Upon request of the PETI committee, the present study examines the issues raised in Petition 0336/2012, the legal framework on the protection of pigs, the level of implementation of the Directive on the protection of pigs in relation to tail-docking on the basis of the available information, the actions being carried out, or that could be carried out, to ensure proper implementation by Member States of the Directive requirements. 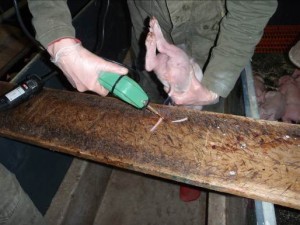 The Committee on Petitions (PETI) examined on the 1st of April 2014 Petition 0336/2012 by C.R. (Danish citizen), on behalf of Dyrenes Beskyttelse (Danish Animal Welfare Society), concerning the routine tail-docking of piglets in Denmark1.

The petition raised the issue of the lack of implementation in Denmark, as well as in most EU Member States, of Council Directive 2008/120/EC laying down minimum standards for the protection of pigs, in relation to the rules governing the tail-docking of pigs.

The Commission recognised during the discussion that the implementation of the Directive in this regard is not satisfactory, but stated that it did not intend to launch infringement proceedings nor to propose amendments to the Directive, considering these actions as not appropriate. It stated instead that it preferred to rely on guidelines for Member States to ensure better implementation of the Directive, as well as on e-learning tools that are currently being developed. It also pointed to upcoming initiatives, such as framework legislation on animal welfare.

On the same day, PETI committee coordinators discussed the petition, the unsatisfactory implementation of the Directive, as well as the refusal by the Commission to launch infringement proceedings against non-compliant Member States. It was decided to request the Policy Department to analyse the issues discussed so to allow the committee to re-examine the matter during the new parliamentary term, including by potentially deciding to send a delegation to a number of Member States to investigate on the effective implementation of the Council Directive.

The present study addresses the PETI coordinators’ request to analyse the issues raised in the petition, the legal framework on the protection of pigs, the level of implementation of the Directive on the protection of pigs in relation to tail-docking on the basis of the available information, and the actions being carried out, or that could be carried out, to ensure proper implementation by Member States of the Directive requirements.

The study concludes that:

–all the available evidence points at persisting high rates of non-compliance in the large majority of Member States in relation to the ban on routine tail-docking of pigs;

-Commission guidelines, training and e-learning tools, including on enrichment and manipulable materials, as well as a possible Framework Law on Animal Welfare, can be useful instruments to support farmers and Member States’ authorities in the implementation of the Directive; – at the same time, these could be accompanied by a stricter enforcement policy, notably since the Directive has been in force for more than 10 years (while the ban on routine tail-docking has been in force for more than 20 years); – the Commission could be bolder and prepared to launch infringement proceedings as an enforcement tool of last resort, as the mere prospect of serious action may prompt Member States to comply; – the Commission could also more systematically collect, monitor and publish information on the transposition of the Directive by Member States, as well as on their degree of compliance with the ban on routine tail-docking of pigs, including through inspections and specific requests to Member States.

Tail-biting, ie a pig biting another pigs’ tail, is an abnormal behaviour caused by several risk factors, notably by a poor or stressful environment frustrating the normal investigative behaviour of pigs (which are among the most intelligent and curious animals) in common intensive farming conditions. Tail-biting can result in infections, affecting the health and well-being of tail bitten pigs and can lead to tail-biting outbreaks.

Tail-docking is the practice of removing the tail or part of the tail of a pig, while routine tail-docking is the systematic docking of the tail of pigs, normally done in the early days of life, with the aim of avoiding the risk of tail-biting. It is done without anaesthesia, though it is a mutilation which is painful. Tail-docking can cause long-term chronic pain and infections, as well as redirection of the biting behaviour to other body parts, such as ears and legs.

Enriching and manipulable materials are materials such as straw, hay, wood, sawdust, mushroom compost and peat or a mixture of these, with which pigs can satisfy their explorative, playful and foraging behaviours. Studies have highlighted that the provision of such materials has a positive effect on pigs, reducing the risk of tailbiting.

Note: The opinions expressed in this document are the sole responsibility of the author and do not necessarily represent the official position of the European Parliament

A a two-day international conference focusing on pig welfare will be held in Copenhagen, Denmark from the 29th to the 30th of April 2015 – and is open to all with an interest in the field of animal welfare, production and research.
The conference is organized by the Danish Ministry of Food, Agriculture and Fisheries and The Danish Centre for Animal Welfare (DCAW).
Entitled “Improving pig welfare – what are the ways forward?”, the conference will bring together scientists and specialists who will present recent knowledge on animal welfare with the main focus on pigs.
In addition the conference will facilitate discussions on the ways forward for pig welfare in several workshops and a panel discussion where stakeholders from different organizations will be brought together.

The conference topics include:

Read more about the conference