This post presents the highlights and abstract of a paper by Westin et al.:

• Post-mortem examination was performed in 798 piglets from 363 litters.
• The major post-mortem findings were starvation (34%) and crushing (28%).
• Fewer piglets starved to death in STRAW compared to CONTROL-litters.
• Strategic use of straw reduced the number of stillborn piglets by 27%.

Piglet survival is the outcome of complex interactions between the sow, the piglet and
their environment. In order to facilitate nest-building and to provide a suitable environment  for the newborn piglets, a strategic method to supply loose housed sows with large  quantities of straw at farrowing has been developed by Swedish piglet-producing farmers.  The objectives of this cohort study were to use post-mortem findings to assess the causes of death and to quantify the effect of a large quantity of straw provided before farrowing compared to limited small daily amounts on stillbirths, post-mortem findings in piglets dying within 5 days after birth and the pre-weaning mortality. On each of four commercial piglet-producing farms in South-West Sweden, one batch of sows was studied during two consecutive lactations. At inclusion, sows were randomly assigned to two treatment groups, and sows remaining in the batch during the next lactation switched treatment group. In the STRAW group (n = 181 litters) sows were provided with 15–20 kg of chopped straw 2 days prior to the calculated date of farrowing. Sows in the CONTROL group (n = 182 litters) received 0.5–1 kg of chopped straw on a daily basis plus about 2 kg for nest-building when the stockperson judged the sow to be about to farrow. After onset of farrowing, additionally 1–2 kg was given. Post-mortem examination was performed in all piglets that died within 5 days after birth (n = 798). The three major post-mortem findings were starvation (34%) crushing by the sow (28%), and enteritis (24%). In conclusion, strategic use of large quantities of straw reduced the number of stillborn piglets per litter by 27% (p = 0.007). Under the conditions studied, the pre-weaning mortality of liveborn piglets was not affected by treatment; however, the distribution of post-mortem findings differed with fewer piglets dying due to starvation and more due to crushing and enteritis in STRAW litters.

This post presents the highlights and abstract of a recent paper by Westin et al.:

With the increase in attention to animal welfare, researchers have focused their interest on the assessment of pain in farm animals. In humans who cannot self-report, such as infants and unconscious patients, the observation of facial expression is frequently used for pain assessment (Prkachin, 2009). The possibility to assess pain through changes of facial expression has also been studied in animals, and pain scales developed which include the ‘Mouse Grimace Scale’ (Langford et al., 2010), the ‘Rat Grimace Scale’ (Sotocinal et al., 2011) and the ‘Rabbit Grimace Scale’ (Keating et al., 2012). Although with some species differences, the three scales focus on the eyes, nose, cheeks, ears and whiskers of an animal.
Although pigs have fewer muscles for facial expression, there are subtle changes in appearance (Flecknell & Watermann-Pearson 2000), but there are currently no published pain scales based on facial expression in pigs. The aim of this research was to investigate if it is possible to observe changes in piglets’ facial expressions immediately after painful procedures. Thirty-one piglets were subjected to tail docking by cautery, while held by the farmer. Images of faces were taken immediately before and after this procedure. These images were sorted and those in which piglets had closed eyes were excluded.
Images were evaluated by two treatment-blind observers, scoring from 0 to 2 (0 was no evident tension and 2 very evident tension).
Because of the non normal distribution, data were analysed with the non-parametric Wilcoxon Signed Rank Test, which showed that the cheek tension score significantly increased from before to after the procedure (P<0.042). This result shows promise for the adoption facial expression as a tool for acute pain assessment in pigs.

In piglets subjected to tail docking cheek tension score significantly increased from before to after the procedure (P<0.05) 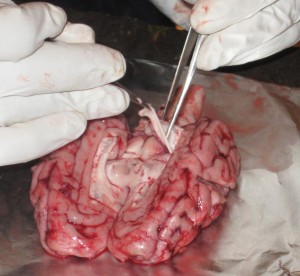