As far as communication is concerned we are doing fine. We now have about 5 scientific papers, 16 conference contributions, 6 farm magazine articles, 1 training, 6 internet contributions (besides the FareWellDock website) and 1 radio performance (see project overview). In addition, the FareWellDock website lists 37 posts. Twelve of these are new since our last meeting in Paris. Also, most partners are present on our partner page.

At the meeting we discuss the report and factsheet for end-users on how to deal with tail biting and tail docking. As part of that discussion we also talk briefly about the HENNOVATION project. In that project a webtool is being developed providing extension information about welfare problems like featherpecking, in a structured and flexible way. It includes the possibility to set up a forum for end-users to discuss innovations, and wiki pages to aggregate collective knowledge (see the Beta version). This is not feasible within the FareWellDock project, but it is good to learn about cross-disciplinary activities. 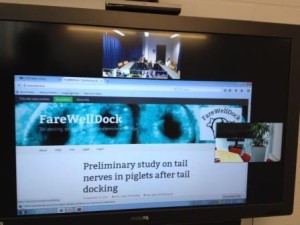 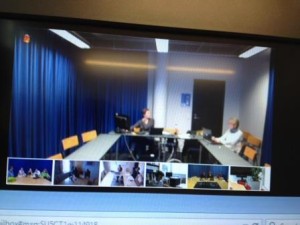