The Tail Biting “WebHAT” (Web based Husbandry Advisory Tool) is a website designed to be an interactive resource providing information about the key risks for tail biting in pigs and practical suggestions to help reduce these risks on-farm.

Taking information from evidence-based sources and scientific literature, this WebHAT identifies a number of risks associated with tail biting (a key pig behaviour), and can be used to generate a report of prioritised, key tail-biting risks found on a farm and obtain suggestions to address the specific risks identified 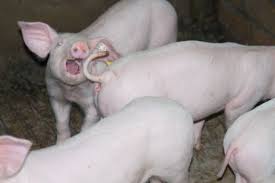 Is it possible to get rid of tail docking? By Vincent ter Beek 2017. Article in PigProgress about FareWellDock.

Tail docking is a well-known practice in pig production, but it is also heavily criticised. An international team of researchers dived into the topic and wondered what its exact effects are on pigs – and what alternatives there are to avoid tail biting….

Note: This article is an approved summary of the Executive Summary which was published earlier this year at http://farewelldock.eu. In future issues of Pig Progress, to be published later this year, several participating researchers in this project will delve deeper into the individual topics they encountered.

The animal’s emotional state, eventually modulated by environmental conditions, may affect cognitive processes such as interpretation, judgement and decision making behaviour. The Iowa Gambling Task (IGT) is a common method to examine decision making behavior in humans in terms of risk avoidance and risk taking that reflects the underlying emotional state of the subject. In the present study, we investigated the influence of environmental conditions on decision-making in pigs. To assess decision making behavior in pigs, the Pig Gambling task has been developed. In this task, the pig can choose between two alternatives. The pigs can make advantageous or disadvantageous choices, where advantageous, low risk choices deliver smaller, but more frequent rewards, whereas disadvantageous, high risk choices yield larger, but less frequent rewards. In the long run, over a series of successive trials, the advantageous choices will yield more reward and less punishment, where punishment consists of delivering reward into the central food trough, but making it inaccessible. After habituation to testing apparatus and testing methods during the course of approximately 4 weeks, all pigs learned to discriminate between the advantageous and disadvangeous alternatives (acquisition phase) at the age of 9 weeks. After a 14-week retention interval, at the age of 24 weeks, retention performance was tested (retention phase). In both phases, 20 trials per day were given to a total of 120 trials. Saliva and hair samples were collected once at the end of both phases for determining cortisol, and body mass was measured at the end of the retention phase. The pigs increased the number of advantageous choices during the course of training. In in the acquisition phase, barren-housed pigs chose the advantageous options more often compared to environmentally enriched pigs. No differences werer found during the retention phase. All pigs made less advantageous choices at the start of the retention phase than at the end of the acquisition phase. The level of hair cortisol was higher in the barren-housed than in the enriched-housed pigs. This difference was more pronounced after acquisition than after retention testing. No other differences were found for cortisol in saliva and hair. The environments did not differentially affect body mass at the end of the study. Summarizing, housing in a barren environment appears to be more stressful than housing in an enriched environment, as indicated by higher hair cortisol levels in barren-housed pigs, but it also improved acquisition of the PGT.

This is a brief note on the use of AMI-sensors and the future of pig farming from the NL partner (MB) in the FareWellDock project.

The future of pig farming

The world is rapidly changing it seems, in major respects. A major energy transition is taking place reducing the dependence on fossil fuels. Agriculture must become more circular to reduce its impact on global warming. Another major transition that is taking place is the increasing role of information technology. Smart farming may soon become reality.  At the same time farm-animal welfare is an increasingly-recognised societal concern.  Since I have been working as an scientist on the interface between information-technology and pig welfare for some time now, I thought it could be interesting to share some thoughts on what the future of pig farming might look like.

My most recent work related to smart farming, at least to some extent, was on AMI sensors of pig enrichment. AMI stands for animal material interactions. AMI sensors can take various shapes and forms. In some way or other AMI sensors record the amount of interaction pigs have with enrichment materials for pigs. Mostly this concerns hanging toys like chains and ropes with or without suspended materials like pieces of wood. So far the use of AMI sensors is (mainly) restricted to applications for scientific purposes, e.g. to measure the value of (different aspects of) enrichment materials (directly or indirectly), the effect of tail-biting ointments, and abnormal and/or sickness behaviour. Using AMI sensors it was possible to acquire new knowledge about enrichment. For example it was confirmed more objectively that destructibility is important for pigs. And we found that repellents may have some effect in reducing tail biting, and that pigs in tail biting pens seem to be more eager to interact with enrichment than pigs in control pens. (You can find my publication list of AMI sensors and abstracts here.) However, AMI sensors are not ready to be implemented for on-farm use, as their application generates difficulties partly because pig pens constitute a rather challenging environment for electronics but also in relation to how to properly interpret what is being recorded.

In 1996 I started my PhD research. I examined ways in which information technology could be used to assess animal welfare. I developed a methodology, called semantic modelling of animal welfare to derive welfare scores based on scientific knowledge. I implemented these principles to assess the welfare state of pregnant sows by developing a decision support system to assess sow welfare (the SOWEL model). A lesson regarding the future of pig farming from my PhD research may be that farmers shouldn’t be expecting that information technology and smart farming is going to make their life a lot simpler. The implementation of smart farming won’t be comparable to farmers buying a sat nav device for their farms, allowing them to forget all about road maps. As the name suggests the FareWellDock project was an international research project aimed to reduce routine tail docking of pigs in the EU. EU legislation has banned tail docking for many years now and it is most likely that future pig farming will require raising pigs with intact tails without much tail biting. This is going to be a major challenge for conventional pig farming. Countries like Denmark, the UK, Germany and the Netherlands are in various stages on the road towards this goal. Some countries like Finland and Sweden may even be said to have arrived at their final destination in this respect. Even in these countries, however, there is a continuing need to reduce tail biting and improve pig enrichment, a major risk factor for tail biting.

From my work on tail biting two major suggestions regarding the future can be made. One recommendation extends the previous one, that farming isn’t going to be simple. Tail biting is a multifactorial problem, i.e. many stressors related to enrichment, climate, feed and social conditions, may contribute to it. Underlying most of these risk factors, however, are decisions made by the farmer him/herself. In line with this I have previously suggested that perhaps the pig farmer may well be the most important risk factor for tail biting. Farmers do not always appreciate this.

The other suggestion concerns the conventional view that scientists should first solve a problem before farmers should implement it. This may have worked well with problems in the past, but it may not work for the remaining, more persistent problems like improving enrichment and raising pigs with intact tails. It is more likely that pig farmers will have to take the initiative and perhaps even start to do some collaborative ‘research’ themselves (for more details on this idea, which I have labelled ‘intelligent natural design’ see Bracke, 2010, Bracke et al., 2011, Bracke, 2016 and esp. Bracke, In press (forthcoming in june 2017)).